Home / Blog / Healthy News You Can Use

Healthy News You Can Use Turmeric, the component of the spice curry that gives it that characteristic yellow color, is high in a compound called curcumin. Curcumin exerts antioxidant, anti-inflammatory, anti-cancer, and lipid-lowering effects.  Curcumin is especially effective for some types of cancer, as it targets key cancer promoting proteins. It also negates the proliferation of cancer cells by arresting them at different phases of the cell cycle and/or by inducing their death.

A number of studies suggest favorable cardiac and metabolic effects of consuming nuts – almonds, cashews, pecans, peanuts and macadamia nuts. Luu et al found that peanut consumption was associated with a 17 -21% reduction in total mortality, and 23-38% reduction in cardiovascular mortality among those subjects in the highest nut intake group, as compared to the lowest consumption group. Consumption of nuts, particularly peanuts given their general affordability, may be considered a cost-effective measure to improve cardiovascular health. Sodas that contain artificial sweeteners (aspartame, saccharin, acesulphame potassium and sucralose) have been popular for some time.  A study analyzed data collected on 749 Mexican- and European-Americans, ages 65 years and older.  Diet soda intake, waist circumference, height, and weight were measured at study onset, and at three follow-ups totaling 9.4 follow-up years. After adjusting for confounding factors, the team revealed waist circumference increases of 0.80 inches for non-diet soda drinkers, 1.83 inches for occasional drinkers, and 3.16 inches for daily drinkers over the total 9.4-year study follow-up period.  The study authors warn that: “increasing diet soda intake was associated with escalating abdominal obesity, a potential pathway for cardiometabolic risk in this aging population.”

As the third leading cause of death in the United States, chronic obstructive pulmonary disease (COPD) is a group of lung diseases that block airflow and result in breathing problems.  A study by Varrasso et al found that those men and women who ate a diet highest in whole grains, vegetables and nuts, and lowest in red meats and sugars, were up to a third less likely to develop COPD – even if they smoked – than those who ate the worst diet.  “These findings support the importance of a healthy diet in multi-interventional programs to prevent COPD.”

Scientific Basis for Benefits of Napping 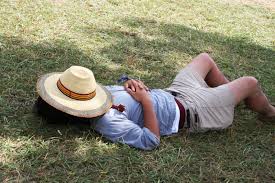 A recent study observed that the stress hormone norepinephrine more than doubled in men the afternoon after a night of sleep restriction, compared to the day after they had slept normally. However, there was no change in norepinephrine when participants were allowed to nap.  Lack of sleep also affected interleukin-6, an immune-regulating molecule; levels of it dropped when the men were sleep-deprived but stayed normal when they were allowed to nap.  The data suggests that napping has stress-releasing and immune effects, and could be used to help those suffering from the ill effects of sleep deprivation.

You can’t Out-Run a Bad Diet

If you’re hitting the gym or running every day but don’t see the numbers going down on the scale, you might be going about weight loss all wrong. New research says focusing solely on exercise is not the answer to losing weight.

An editorial published in the British Journal of Sports Medicine points to excess sugar and carbs, not physical inactivity, as the primary cause for the growing obesity epidemic.

While regular exercise has many health benefits such as reducing the risk of developing cardiovascular disease, type 2 diabetes and some forms of cancer by 30 percent, it is our high caloric diets that lead to obesity.

Calorie counting alone isn’t the answer as the source of the calories matters too. For every additional 150 calories of sugar, there was an 11-fold increase in the prevalence of type 2 diabetes, compared to 150 calories obtained from fat or protein. These results were independent of the person’s weight and physical activity level.

With summer around the corner, it’s time to start thinking about sunscreen! Since choosing a non-toxic, quality sunscreen can seem as challenging as identifying the best retirement plan or choosing health insurance, we thought we’d help guide you through the process.

Here are four tips for choosing a healthier sunscreen: