Agave- Not so Sweet 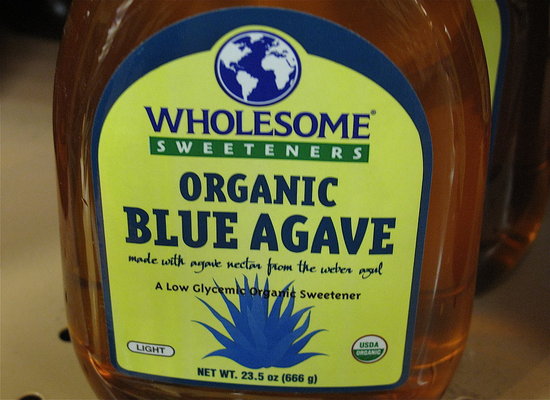 Natural sweeteners are becoming more popular among those seeking “healthy” sweetener alternatives as well as out of fear about white sugar and high-fructose corn syrup that is so ubiquitous in our food.

One so called healthy alternative sweetener that has been generating a lot of buzz is agave.

Unfortunately, in reality, agave is processed just like other sugars, and is no better for you.

More than 300 species of agave plants grow in the southern United States, northern South America, and the hilly regions of Mexico. Agave nectar has been used for centuries as a folk remedy for its medicinal properties. The Aztecs mixed it with salt and used it for skin infections and wounds.

Most agave sweeteners are produced from the blue agave plant. The core of the plant contains the aguamiel or “honey water,” the substance used for syrup production (and, when fermented, tequila). Although agave starts out as this natural elixir from Mother Nature, the form you can buy has been processed to form a syrup or nectar.

Processing the aguamiel yields a product with either a dark amber or light color, and a consistency much like maple syrup. The light-colored nectar resembles maple syrup or honey in flavor, but the taste is more delicate, which has made agave a popular sweetener for energy drinks, teas, nutrition bars, and baked goods. Amber and dark agave nectar taste similar to caramel, and can be used like maple syrup on pancakes and waffles.

Agave has about 60 calories per tablespoon, compared to 40 calories for the same amount of table sugar. Because agave is about 1 1/2 times sweeter than sugar, you can use less of it.

Is Agave Healthier Than Sugar?

Concentrated fructose sweeteners don’t appear to offer any health advantages. In fact, a study in the Journal of Clinical Investigation suggested that consuming fructose may be less healthy than consuming similar amounts of glucose. Study participants who consumed fructose were found to gain more unhealthy visceral fat, were more insulin-resistant, and were at greater risk of developing heart disease and diabetes.   http://www.jci.org/articles/view/37385

But What about the Glycemic Index?

Proponents of agave claim that it has a low glycemic index (a scale that measures how much a food raises blood sugar levels). While agave does rank lower than many other sweeteners on the glycemic index, it should not be used as a green light for diabetics or others looking to follow a low glycemic diet.

The American diet contains too much sugar, especially in the form of sweetened beverages.

When it comes to sweeteners, all caloric sugars are virtually the same.

Unprocessed agave nectar or syrup can be as high as 90% concentrated fructose (a simple sugar that occurs naturally in fruit), and the rest glucose.

The agave you can buy ranges from 90% to as little as 55% fructose (similar to high-fructose corn syrup), depending on the processing, according to food technologists.

HFCS is commonly found because corn has become one of the cheapest most widely available crops, acts as an alternative sweetener to normal table sugar. The fructose has a much sweeter taste and acts as a much more cost effective option for food producers and manufacturers.

Ultimately, HFCS is one of the top causes for obesity in the world, especially in the US. This  sweetener has the ability to decrease metabolism and hinder the natural production of insulin and other appetite controllers, in addition to other problems.

Some Reasons to Steer Clear or HFCS

1. Obesity- HFCS limits your body’s ability to produce insulin and leptin, making it difficult to metabolize food and regulate appetite. The pancreas remains insulin resistance to all types of fructose, including HFCS, severely hindering appetite control.

2. Diabetes- Due to obesity and irregular insulin fluctuations, HFCS leads to diabetes in some people.

4. LDL Cholesterol and Triglycerides Increase- Sugars metabolize into fat, therefore increasing unhealthy cholesterol levels along with the fat storages in your body. Since high fructose corn syrup does not stimulate the secretion of insulin or leptin, foods with high levels of the sweetener become nearly fully absorbed and metabolized into fat and cholesterol.

5. Poor Immunity- HFCS interfere with the production of hormones and enzymes in your body that are part of your immune system.

6. Mood Swings and Withdrawal- Too much sugar and HFCS will cause your body to crave more, and when trying to cut back, the desire and cravings only increase.