Home / Blog / Do you use NSAIDs regularly? If so consider this

Do you use NSAIDs regularly? If so consider this 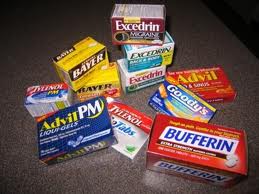 A survey of over 9000 patients published in 2005 concluded that over-the-counter (OTC) analgesics, including nonsteroidal anti-inflammatory drugs (NSAIDs), are widely used frequently by patients who are generally unaware of the potential for dangerous adverse side effects.

Given recent concerns about use of acetaminophen products, and the potential that patients will turn to NSAIDs as an alternative, it is important to understand the implications about their use.

The recent acetaminophen warnings were based on reports  that excess doses could cause liver damage. As a result, many people turned to NSAIDs.

NSAIDs use can increase the risk of  adverse cardiovascular,  gastrointestinal and kidney reactions.

What do you take when you have a headache, sprain your ankle, or have a recurring back problem?

Many  people turn to over the counter (OTC) agents believing that because they can be purchased  OTC, that they are not  harmful.  This is far from the truth.

Another population  that uses NSAIDs (often indiscriminately) is athletes. The number of high school, college, and professional athletes who use NSAIDs regularly to help with muscle aches and pains from competition is astounding and likely hazardous.

NSAIDs have never been proven to help with muscle aches and in fact, can disrupt the healing process and increase the likelihood of injury by masking the  warning signals of pain.

Gastrointestinal issues in this population  can be significant, because many don’t eat before an event. In addition, athletes get dehydrated during an event, and with dehydration, there is more stress on  kidneys and a greater risk of kidney damage. .

So what can you do when you have pain?

Many people are turning to alternative or  “integrative”  therapies that includes: Acupuncture, chiropractic, herbal therapies, yoga, and massage.

These therapies can provide relief as well as augment the healing process.

Determining what integrative therapies are appropriate can be done by understanding what phase of pain you are in.

There are three general phases of pain:

The immediate phase results after pain receptors (nociceptors) are irritated, e.g a burn or sting. This is generally short lived and  self-limiting.

The acute phase is commonly known as inflammation and is characterized by: Heat, swelling, redness, altered function and pain. In this phase, the body barricades danged tissue from healthy tissue and initiates the healing process. The pain is due to biochemicals that are facilitating the healing process. This pain is also short-lived and self-limiting. Blocking the process  with NSAIDs is counterproductive, because it will delay and disrupt the healing process.

Chronic pain generally serves no purpose and can be due to a number of factors, the most common of which is structural and functional alterations within the neuromusculoskeletal system, e.g.  Muscle imbalances and joint dysfunction.

Acute Phase-  While this is self-limiting, the pain can be annoying and uncomfortable.  The key is to provide relief without disrupting the healing process. This phase responds to gentle manual therapies, such as Instrument Assisted Soft Tissue Mobilization (IASTM) with a light application, acupuncture, contrast hydrotherapy (alternating hot/cold application), topical analgesics and botanical medicines, such as Bromelain and Curcumin.  See prior blogs on MEAT vs RICE and Voodoo Flossing.

Chronic Phase-  This is where integrative medicine excels,  as conventional medicine is stuck with palliative, symptom  based measures (i.e. NSAIDs).

Acupuncture/Dry needling, chiropractic, manual therapy, IASTM and exercises can not only provide relief, but are often the keys to complete resolution.

If you have pain, NSAIDs are merely “chemical band-aids” which can have  adverse effects at the site of pain as well as causing  damage to the Gut, liver and kidneys.